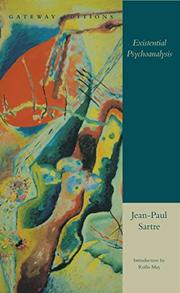 Jean Paul Sartre, like Picasso, has become one of the most important men of his time even though his work is only understood by a select few. The two essays in this volume will probably do little to clarify his philosophy to the average American, but its import will sift down into more popular means of expression and its influence will be felt. This is part of Being and Nothingness- which is Sartre's major work, and Hazel E. Barnes does a fluid translation and an introduction which smooths the way for new readers. The first essay, Existential Psychology, deals with a new method for understanding personality and approaches the personality as a factor in flux swinging between "factivity" (the brute fact of existence) and the "irreducible project" or what we wish to become. To Sartre, a personality is not the sum total of its impulses, environment and drives, but an entity which stamps even its more trivial choices and actions with an inescapable trademark. The second essay, Bad Faith, deals with the personality in relation to the society in which it functions, and man's right to choose what one wishes to do without suffering the consequences of one's choice... Heady stuff, with far reaching implications, but only for the patient and thoughtful.