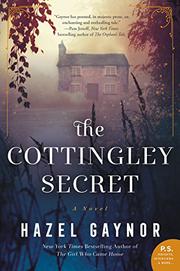 A woman inherits a bookstore and discovers her family’s connection to a famous set of photographs.

In 1917, while the world was in the midst of a war, cousins Frances Griffiths and Elsie Wright staged photographs to make it appear that Frances was surrounded by fairies. Although they never intended for the faked photographs to be seen by anyone outside their family, the photos became famous enough that Sir Arthur Conan Doyle publicly claimed they were real. With so much attention directed toward them, Elsie and Frances promised to keep the truth a secret. One hundred years later, in the present day, Olivia Kavanagh inherits her grandfather’s bookshop in Ireland. But Olivia’s grandfather didn’t just leave her the bookshop—he also left a manuscript written by Frances, and it details exactly how (and more importantly, why) she and Elsie staged their photographs and maintained their hoax for so many years. Olivia has her own troubles to deal with—extracting herself from an unhappy engagement, caring for her ill grandmother, and facing a diagnosis of infertility—but she soon discovers that, as her grandfather told her, stories choose “the right readers at the right time.” Just as Frances realized that people needed to believe in fairies to find hope during WWI, Olivia finds that believing in a little bit of magic helps her reconnect with the woman she used to be. The insight into the true story of the Cottingley fairies is interesting, and it’s easy to understand why two girls might play along with an innocent trick that became a worldwide sensation. Olivia’s struggles are never quite as compelling, and readers may find themselves eager to slip back into the world of the fairies.

Gaynor (The Girl from the Savoy, 2016, etc.) creates a lovely meditation on the power of belief and hope.