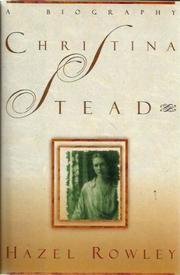 An absorbing biography that will help Stead's fans place her fiction in the context of her life and may well attract new readers to her work. Christina Stead (190283), who was born and died in Australia (about which, writes Rowley, she was ``both nostalgic and patronising''), did her writing during her years in Europe and the US. Although she tapped real events and people for her fiction—and not just for her autobiographical novels, including the superb The Man Who Loved Children—she could be secretive in her private papers, identifying people by fictional names, writing in code, and ultimately destroying many documents. Despite this obstacle, Rowley (an Australian academic, currently a visiting scholar at Columbia University) offers a coherent and convincing portrait that reaches back into a youth in which Stead was overshadowed by her father, who first instilled in her a lifelong socialist orientation, insecurity about her appearance (he dubbed her ``Pig Face''), and a yearning to be adored by a man. When she arrived in London in 1928, Stead found just the man—William Blake (originally Blech), whom Rowley succinctly describes as a ``Marxist investments manager who seemed to know something about everything.'' Blake hired her to be his secretary, and Stead accompanied him to Paris, where their romance flourished—despite a wife who would not divorce Blake for 23 years. When the bank employing Blake collapsed, the pair fled to New York. Stead's writings earned only modest royalties even when favorably reviewed, and Blake could not find work, so they returned to Europe in a consistently difficult hunt for economic security that gave their lives a nomadic flavor. By 1949, Stead said to a friend, ``I have been a writer, quite unsuccessfully for twenty years,'' although a revival of interest in her work, which began in the mid-1960s, helped her return to Australia in 1969 as a famous author and ``Official Personage.'' A welcome study of an underrated author. (16 pages of photos, not seen)