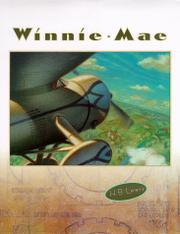 A beautiful but over-designed book—it has a small, thin typeface that is difficult to read—about a boy and his model planes. As soon as he finishes building one, he starts saving for the next one. And the next one is the Winnie Mae, flown around the world by the intrepid Wiley Post with his eye patch (Post died just recently). The boy is amazed by the instructions (some of which appear on the endpapers), for example, “cut swiftly and decisively but with compassion.” When the Winnie Mae is finished, and he takes it to his favorite tree, he can imagine flying it, and so he does. The boy views his world from above, and marvels at the magic. The story unfolds gracefully to this point, but becomes awkward; when the boy goes to show his plane to some old fishermen, he is stopped by older boys who tear the Winnie Mae to pieces. The boy rejects the explanation that the model plane was only a key to unlocking his imagination, and isn’t helped by his parents, who are too concerned with “work and following rules.” In a forced resolution, the magic of flying is restored to the boy, who sees the goodness of his parents and the fishermen. Splendid illustrations, reminiscent of the work of Chris Van Allsburg, range in size from tiny vignettes to full-page spreads, all in a rich and vivid style. In his first picture book, Lewis uses close-ups, panoramas, edgy angles, and light and dark to grand effect. The book may captivate older boys with dreams of flying, if they can be book-talked past the picture-book format. (Picture book. 8-11)