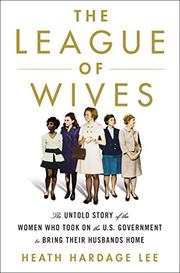 THE LEAGUE OF WIVES

The Untold Story of the Women Who Took on the U.S. Government to Bring Their Husbands Home

A Vietnam War story about the mostly unreported role of military wives who ignored protocol to help free their husbands, held as prisoners of war, from torture by the North Vietnamese.

Relying on extensive personal interviews and previously unseen documents, Lee (Winnie Davis: Daughter of the Lost Cause, 2014) builds to February 1973, when 115 American POWs departed North Vietnam on U.S. military transport planes to receive health care, debriefings, and finally emergence into public view. Many of the American airmen never thought they would be shot from the sky, captured, and tortured—partly because of their ultraconfidence in their training, partly because they severely underestimated the fighting capabilities of the North Vietnamese military. Their wives back in the States, many with children, naturally felt desperate to learn the fates of their husbands. However, commanders in the American military services and diplomats in the U.S. State Department told them, often in condescending fashion, to remain quiet and docile so that negotiations with the enemy could proceed. Eventually, after years of excruciating worry, the wives of the prisoners—as well as fliers missing in action—began to actively discuss how to remedy the situation. As more years passed with no progress, wives on bases scattered around the country began organizing together. Lee’s cast of determined women is extensive and occasionally difficult to track as they enter and depart the narrative. Two of the most prominent are Sybil Stockdale (husband Jim) and Jane Denton (husband Jeremiah). (The renowned John McCain does not play a major role in the narrative.) In addition to the wrenching personal stories, the author handles context gracefully, especially regarding the wives and their ability to find their voices amid the continuing saga of an unjust war. “If these military wives hadn’t rejected the ‘keep quiet’ policy and spoken out,” she writes, “the POWs might have been left to languish in prison.”

A book both educational and emotional.