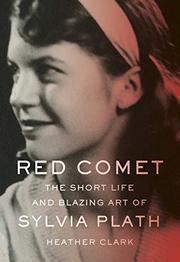 The Short Life and Blazing Art of Sylvia Plath

A sober and detailed critical biography of one of the 20th century’s greatest and most misunderstood poets.

The story of Sylvia Plath’s (1932-1963) life is inseparable from her tragic death: She committed suicide in London at 30, leaving behind a body of poetry and fiction often shaped by depression, rage, and heartbreak. Even so, Clark, a longtime Plath scholar, is determined to extricate the poet from the prison of a reputation as a “witchy death-goddess” and reframe her as a serious, wide-ranging artist with prodigious expressive powers. “Plath took herself and her desires seriously in a world that often refused to do so,” writes Clark. To make her case, the author meticulously explores Plath’s omnivorous literary interests and busy social life; she was a creative writer who craved liberation as well as a high-achieving Smith College student and prim Mademoiselle magazine intern who sought solace in conformity. Her warring urges took a toll early: In 1953, following a harrowing round of electroshock therapy, she attempted suicide, an experience repurposed for her novel The Bell Jar. Yet her conflicts also motivated her; a whirlwind marriage to the British poet Ted Hughes stoked her iconoclasm while also providing entry into the boys club of literary Britain. Clark claims better and deeper access to Plath’s unpublished writings (particularly related to Hughes) than prior biographers, and if that sometimes means she is persnickety about Plath’s day-by-day (if not hour-by-hour) activities, the approach avoids sloppy armchair psychoanalysis. The author’s attention to specifics serves her very well in the closing pages, as she tracks how Plath’s depression, anxiety over her literary standing, despair over her failed marriage, and fear of institutionalization speeded her death even while those same forces inspired indelible, harrowing late poems like “Daddy,” “Lady Lazarus,” and “Edge.”

A major biography that redeems Plath from the condescension of easy interpretation.