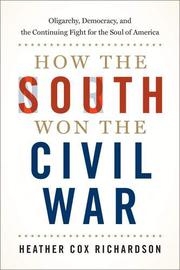 HOW THE SOUTH WON THE CIVIL WAR

Oligarchy, Democracy, and the Continuing Fight for the Soul of America

A thought-provoking study of the centuries-spanning battle between oligarchy and equality in America.

In 1860, writes Richardson (History/Boston Coll.; To Make Men Free: A History of the Republican Party, 2014, etc.), the Republican Party took pains in its platform to remind audiences of the Declaration of Independence and its assertion that “all men are created equal.” All men were not equal, of course, to say nothing of women, who would not gain the right to vote for another three generations. Still, the Republicans opposed a slave system that they regarded as despotic while Southern true believers held that a small elite formed a proper polity all their own, slave owners who “would resolve the American paradox by shearing off the portion of it that endorsed equality.” It was this radical rejection of a founding premise, however imperfectly applied, that distinguished Republicans and Southern Democrats. By Richardson’s account, it is this radical rejection that, the party roles having reversed polarity a century later, distinguishes Republicans from Democrats, the former of whom now possess “the language they need to undermine our democracy, and to replace it with an oligarchy.” Furthermore, they believed that “their new system made their nation different from the Old World, which was split between a corrupt aristocracy and the lazy poor.” In their view, a corrupt aristocracy was fine as long as it did not have to share spoils or power; of course, the common trope among Republicans these days is that if you’re poor, it’s because you choose to be. Nixon’s “Southern strategy” did much to propel neo-Confederate values into the modern Republican Party. Later, Newt Gingrich enshrined them, fortifying class inequality by placing “tax cuts at the center of Republican policy” and reducing political interference by changing lawmaking so that lobbyists—not representatives—wrote regulations and laws that “were designed to put the American government at the service of democracy.”

A powerful case for viewing the unfinished Civil War as a Confederate victory after all.