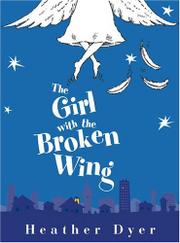 THE GIRL WITH THE BROKEN WING

Amanda and James’s science teacher says angels don’t exist, because wing and body ratios are aeronautically impossible, so who is it that they’re hiding in their attic bedroom? It’s Hilary, who looks like a real angel with soft white wings from her shoulders almost to her feet, but she doesn’t act like an ethereal saint. No glamorous entry into their lives, Hilary is depicted by Bailey’s simple line drawings splayed onto their roof one windy rain-soaked night and then collapsed onto their sofa. Dyer creates a comic early-chapter book where the engaging humor is intensified by Amanda and James’s perplexity as they scramble to protect their clueless “angel.” They can’t go to an adult for help because the adults won’t believe and are silly about practicalities. Warm and funny revelations show the bored child-angel stuck in an eternity of too much hymn singing and do-gooding, exuberantly trying to participate in normal everyday fun before she has to go home. Ripe for a sequel. (Fiction. 7-9)