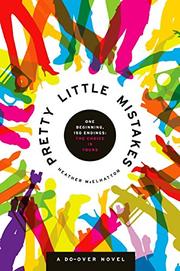 An adult Choose Your Own Adventure from public-radio producer McElhatton.

As in that vintage children’s series, the protagonist—you—is offered many choices en route to 150 different endings. One major difference, however, is that McElhatton’s debut confronts such decidedly mature dilemmas as whether or not to remain the houseguest of Alouette, née Rashid, a London-based Indian transvestite privy to the ways of the bordello and even the “gloryhole.” Those fondly remembered children’s mysteries never posited a protagonist on a heroin-peddling caravan, rocketing around Western Europe and leaving a trail of overdosed corpses in the rearview mirror. The author breaks new ground by taking an unsophisticated, gimmicky form and injecting it with a whopping dosage of X-rated content. Whether that innovation leads anywhere worth going is debatable. A book in which the teenage, sexually promiscuous narrator is beaten half-unconscious by her high-school boyfriend is presumably not intended for young readers. Adults, by contrast, while certainly capable of dealing with references to forced female circumcision and cunnilingus, are not likely to take seriously the “create your own ending” format. McElhatton has written an occasionally clever book that will appeal only to a very limited audience of grown-up readers who are unfazed by its methodology. It’s the equivalent of an adults-only coloring book: what’s the point?

Interesting to read for about ten minutes, but some things really are just for kids.