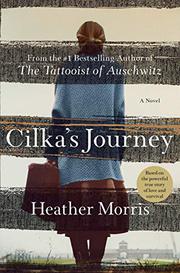 In this follow-up to the widely read The Tattooist of Auschwitz (2018), a young concentration camp survivor is sentenced to 15 years’ hard labor in a Russian gulag.

The novel begins with the liberation of Auschwitz by Soviet troops in 1945. In the camp, 16-year-old Cecilia "Cilka" Klein—one of the Jewish prisoners introduced in Tattooist—was forced to become the mistress of two Nazi commandants. The Russians accuse her of collaborating—they also think she might be a spy—and send her to the Vorkuta Gulag in Siberia. There, another nightmarish scenario unfolds: Cilka, now 18, and the other women in her hut are routinely raped at night by criminal-class prisoners with special “privileges”; by day, the near-starving women haul coal from the local mines in frigid weather. The narrative is intercut with Cilka’s grim memories of Auschwitz as well as her happier recollections of life with her parents and sister before the war. At Vorkuta, her lot improves when she starts work as a nurse trainee at the camp hospital under the supervision of a sympathetic woman doctor who tries to protect her. Cilka also begins to feel the stirrings of romantic love for Alexandr, a fellow prisoner. Though believing she is cursed, Cilka shows great courage and fortitude throughout: Indeed, her ability to endure trauma—as well her heroism in ministering to the sick and wounded—almost defies credulity. The novel is ostensibly based on a true story, but a central element in the book—Cilka’s sexual relationship with the SS officers—has been challenged by the Auschwitz Memorial Research Center and by the real Cilka’s stepson, who says it is false. As in Tattooist, the writing itself is workmanlike at best and often overwrought.

Though gripping, even moving at times, the novel doesn’t do justice to the solemn history from which it is drawn.