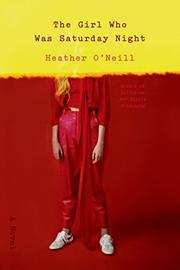 THE GIRL WHO WAS SATURDAY NIGHT

A young Montreal woman tries to escape her minor fame to have a normal life but can’t see past her bizarre family.

Nouschka Tremblay's family ties are stronger than most; when she was young, her father, Étienne, a folk singer, catapulted her and her twin brother, Nicolas, into the small but intense spotlight of Montreal media by using them as props on late-night TV shows to help promote his music and the cause of French-Canadian separatism. At the start of the book, though she is now 19, she and Nicolas still sleep in the same bed and are still embedded in Montreal’s consciousness. When Nicolas dropped out of high school, she followed—no matter how many bad choices she makes about men, no one else is worthy of her devotion—but now she is starting to regret it. When a documentarian starts filming her family to see what has come of the famous Tremblays, Nouschka starts to imagine a life beyond her family, first going back to school for her diploma and then getting married to a man her brother loathes. The story is delightfully bizarre, flush with the free-form vacuity of early adulthood, but what really shines here is O’Neill’s writing. The author (Lullabies for Little Criminals, 2006) stuns with the vivid descriptions and metaphors that are studded throughout the book, such as “[h]e looked at me some days like I was a hostage that no one was paying the ransom for” and “[The swan] held its wings in front of it, like a naked girl with only her socks on, holding her hands over her privates.” As Nouschka begins to see herself as a separate person, O’Neill’s writing grows ever more distinct and direct. This vigorous writing makes the book; the story is surprising and satisfying, but the real star is Nouschka and how she tells it.

A coming-of-age story with a working-class, reality TV twist.