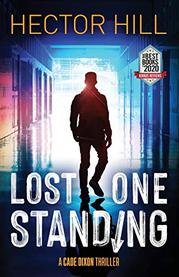 Seventeen-year-old Cade Dixon is part Holden Caulfield, part Jason Bourne, with a touch of MacGyver. He was raised by a single mother whose administrative position at a prep school enables him to attend. He covertly sells homework assignments to his wealthy classmates and harbors a crush on a student named Kira but hasn’t yet kissed a girl. He’s inordinately curious, highly intelligent, and knows every hiding place in the school. These characteristics, combined with his mastery of mixed martial arts, make him a terrific foil for brilliant, diabolical criminal mastermind Reilly, who’s employed 14 heavily armed men to lay siege to the school. He has sophisticated, encrypted communication devices enabling him to jam all cellphones and electronics on campus and to tap into law enforcement agencies’ feeds. Cade avoids the initial student roundup and works to prevent what horrors he can; he manages to get his mother released, enlist Kira’s aid, and inflict serious injury on some henchmen. Meanwhile, Reilly announces his plan: The 10 richest parents of the hostages must transfer as much money as they can raise in an hour into an offshore account. The child whose parents raise the least will be executed. The story’s pacing is taut and its tension intense, but it’s tempered by the enjoyable pairing of Cade and Kira. Both are supersmart, funny kids whose knowledge base includes physics, chemistry, psychology, and even Morse code to help them outfox Reilly. Apt high school references abound, as when Cade notes that a weaponized 1922 school trophy is solid metal because “back then you only gave out one”—no participation awards necessary. Kira pulls off a few acts that are reminiscent of Katniss Everdeen’s exploits because, due to the popularity of The Hunger Games and Brave, “every girl in school had been obsessed with all things archery.” The book’s positive depictions of female roles and slyly understated politics are also appealing.

A captivating story of a reluctant hero that will leave readers eagerly anticipating the next installment.