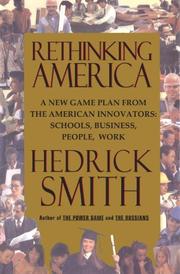 A Pulitzer Prizewinning veteran journalist repackages old news to argue for an overhauled America. Smith, a longtime student of Soviet society (The New Russians, 1990, etc.), here turns his attention to his homeland, contrasting our educational and economic systems—and especially the points where they intersect—with those of Japan and Germany. He finds America wanting, and for good reason. Noting, as many others have, that Japanese and German workers are much better trained than are their American counterparts, he takes a close look at the interplay of solid, year-round education and apprenticeship programs with economies that can roll with the punches rather than ``downsize,'' jettisoning workers and destroying lives in their retreat. Along the way Smith turns up surprises; he notes, for instance, that Japan's supposedly rigid public-school curriculum is remarkably flexible, with ``a baffling lack of stress on academic achievement'' and a more emphasis on ``stimulating [students'] delight in the process of learning than...on their getting the right answers.'' His arguments are sharp and telling, and Smith is not afraid to steer into controversy, stating baldly that ``by focusing its resources on the college-bound, America's public school system has unintentionally become undemocratic, elitist.'' Smith's mistrust of received wisdom is a refreshing plus. The book is occasionally marred by business-book clichÇs: the abundant use of terms like ``benchmarking'' and of metaphors from professional sports, the peppered quotes from that old mainstay, Machiavelli. It is also too long by half. Still, his sharply pointed case studies and eye for telling details keep Rethinking America on track to a hard conclusion: We must change our ways or be lost in the future. Smith's timely arguments for redesigning our educational system to prepare students for life to come bears much discussion.