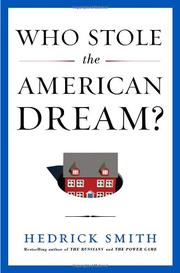 WHO STOLE THE AMERICAN DREAM?

“Over the past three decades,” writes the author, “we have become Two Americas.” We have arrived at a new Gilded Age, where “gross inequality of income and wealth” have become endemic. Such inequality is not simply the result of “impersonal and irresistible market forces,” but of quite deliberate corporate strategies and the public policies that enabled them. Smith sets out on a mission to trace the history of these strategies and policies, which transformed America from a roughly fair society to its current status as a plutocracy. He leaves few stones unturned. CEO culture has moved since the 1970s from a concern for the general well-being of society, including employees, to the single-minded pursuit of personal enrichment and short-term increases in stock prices. During much of the ’70s, CEO pay was roughly 40 times a worker’s pay; today that number is 367. Whether it be through outsourcing and factory closings, corporate reneging on once-promised contributions to employee health and retirement funds, the deregulation of Wall Street and the financial markets, a tax code which favors overwhelmingly the interests of corporate heads and the superrich—all of which Smith examines in fascinating detail—the American middle class has been left floundering. For its part, government has simply become an enabler and partner of the rich, as the rich have turned wealth into political influence and rigid conservative opposition has created the politics of gridlock. What, then, is to be done? Here, Smith’s brilliant analyses turn tepid, as he advocates for “a peaceful political revolution at the grassroots” to realign the priorities of government and the economy but offers only the vaguest of clues as to how this might occur.

Not flawless, but one of the best recent analyses of the contemporary woes of American economics and politics.