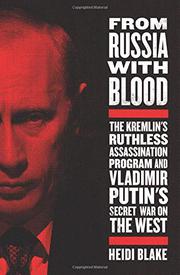 FROM RUSSIA WITH BLOOD

The global investigations editor at BuzzFeed News examines “Kremlin-sanctioned killing around the world.”

British journalist Blake (co-author: The Ugly Game: The Corruption of FIFA and the Qatari Plot To Buy the World Cup, 2015) builds on a June 2017 BuzzFeed News exposé to delineate how Vladimir Putin and his Russian assassins have murdered political opponents over the years. Some of the killings occurred within Russia, but the author focuses on the assassinations of dissidents who escaped from Russia to the U.K. To a lesser extent, Blake also discusses those who fled to the United States. To assist readers in understanding the context of each death, Blake provides detailed explanations of why world leaders—including Tony Blair, Gordon Brown, David Cameron, Bill Clinton, George W. Bush, and Barack Obama—believed Putin might liberalize Russian society and become an ally of democratic nations. That severe misreading led the British and U.S. leaders to deemphasize the significance of the assassinations ordered by Putin. Along with her BuzzFeed colleagues, Blake accuses the British and U.S. governments of coverups, which have taken various forms—e.g., labeling murders as suicides, withholding gory details of the deaths, and conducting desultory law enforcement inquiries so that journalists would feel discouraged about publishing information that might agitate their readers. Blake explores the highly publicized murder of Russian reporter Anna Politkovskaya, but that case is an outlier in a narrative filled with foreshadowing about which dissident will be killed next. As the author shows, the 2006 death of Russian defector Alexander Litvinenko not only eliminated a high-profile Putin opponent; it also showed “Putin to be just as brutal as his critics claimed, and finally the world was listening.” The most thoroughly documented case is the death of Boris Berezovsky, a wealthy Russian exile who delighted in taunting Putin from afar. Though well-researched, the narrative sometimes bogs down in the author’s discussions of Russian and British politics. When Blake focuses on the circumstances surrounding the murders, the narrative moves more smoothly.

An uneven but still useful documentation of the disturbing reach of a dangerous world leader.