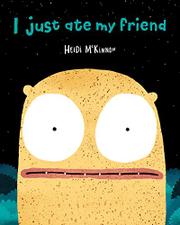 I JUST ATE MY FRIEND

On the spur of the moment, anyone can make a mistake.

In a twist on Eric Carle’s classic Do You Want to Be My Friend? (1971) and the many like-themed quests trailing in its wake, a suddenly friendless yellow monster makes the titular confession, mourns, and then goes in search of a new companion. Following a string of refusals that range from “No, you are too big,” and “No, you are too scary” (not to mention a terse “No”) to a terrifying, page filling “Rrrooar!” the monster begins to lose heart. Will it be lonely forever? But, no fears, a suitable (teal) candidate sidles up at last: “Hello! I will be your friend.” Cue the warm smiles and clasped paws…until a page turn reveals only the new arrival, guiltily admitting, “I just ate my friend.” Arranged in simple compositions and positioned for maximum comic effect, McKinnon’s monsters don’t look at all feral (although the protagonist does have a mouthful of sharp teeth, they are very tiny, commanding much less attention than its large, googly eyes and potato-shaped body), so the summary fate of the yellow one may come as a surprise (at least the first time through) to audiences who expect a more-conventional ending. Readers who prefer their comedy on the dark side à la Jon Klassen’s I Want My Hat Back (2011) or Jeanne Willis and Tony Ross’ Tadpole’s Promise (2005) will relish this alternative outcome.