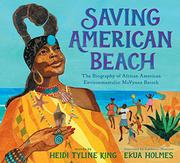 An unsung American hero who used her voice to preserve the natural spaces she loved.

MaVynee Betsch grew up in the Jim Crow South, where she and other Black kids couldn’t swim with the White kids. An orange rope even segregated the ocean. Wanting beaches for all, MaVynee’s wealthy great-grandfather, Abraham Lincoln Lewis, bought a beach in Florida and welcomed African Americans, calling it American Beach. This “ocean paradise” entertained both regular folk and greats like Ray Charles, Zora Neale Hurston, and Ella Fitzgerald. MaVynee herself became a successful opera singer, but when her mother got sick and died, MaVynee abandoned her musical career and returned to Florida only to find her beloved beach in disrepair. Developers wanted to buy it to build condos. Holmes’ stunning, intricately composed paint-and-collage images bring MaVynee to life in full color and capture her eccentricities: She grew her locked hair to 7 feet long, decorating it with seashells, sometimes styling it into a high topknot and other times draping the end over her arm. Holmes uses a brilliant cerulean for ocean and sky and peppers the vibrantly patterned illustrations with found items such as torn raffle tickets, newspaper clippings, promotional posters, and sheet music, making each spread visually rich, realistic, and fascinating. King’s storytelling, Holmes’ artwork, and informative backmatter portray MaVynee Betsch as the larger-than-life Black environmentalist she was. (This book was reviewed digitally with 9.5-by-21-inch double-page spreads viewed at 27.6% of actual size.)

A spectacular story about a little-known eco-warrior whose story should be told and retold.