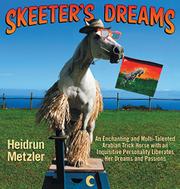 A lighthearted, illustrated can-do story about a four-legged performer extraordinaire.

In this debut children’s book, Skeeter, an Arabian trick horse, gallops toward dreams and adventures. She envisions success in more exciting and certainly less-traditional careers than her current one. “I am a trick horse and could do so much more,” Skeeter laments. “As long as I have dreams, who knows how high I can soar?” And soar she does. Readers travel with the stunning white horse as she transforms into a theatrical actress with a bouquet of roses between her teeth, a painter who stands beside a canvas showcasing the beautiful vista that surrounds her, a funky-hat-wearing musician bedecked with a guitar around her neck, and more. The fantasies become more and more far-fetched: She surfs a blue Hawaiian wave and masquerades as one of Santa’s helpers on a snow-covered field in front of a white-capped mountain. Amid the beautiful scenic backdrops, the singsong rhyming verse moves the story forward through the Arabian’s different personas. Metzler charmingly portrays Skeeter’s antics as the costumed horse prances through scenes in which she declares her hopes and fantasies, illustrated by a series of vivid, full-color (often amusingly if not flawlessly Photoshopped) photos of Skeeter’s imaginings. The dream concept could be turned into a lesson, either formal or not, although Metzler doesn’t make the point in an overly explicit manner. Instead, the author aims to lead the way toward a connection, but the message is subtle and the story remains Skeeter’s to tell. Either way, young readers will smile as they explore her antics. If a horse can be a mountain guide who spots and belays rock climbers, why can’t they?

An enjoyable romp for kids willing to play along.