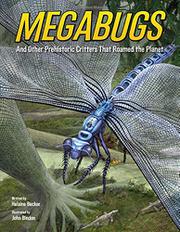 And Other Prehistoric Critters That Roamed the Planet

Writing with crowd-pleasing vivacity—Arthropleura “was bigger than a basketball player. And with up to 80 quick-moving, grasping legs, it could have easily gripped and smothered one too!”—Becker profiles a set of humongous arthropods that, in Bindon’s exactly detailed scenes, crawl, slither, glide, swim, or fly past with all-too-convincing realism. All come with (fossil) range maps and human silhouettes for size comparisons, and most are placed in natural settings, with other fauna of the period visible in the backgrounds. In her descriptive notes, the author maintains a proper caution, following current thinking in suggesting that heightened levels of atmospheric oxygen made such uncommon mass possible but noting that “fave snacks,” life cycles, and causes of extinction are speculations. Following the prehistoric parade, a select set of today’s biggest creepy-crawlies bring up the rear, capped by a menacing science-fictional megabug that looks like an ant-scorpion hybrid. Though no replacement for Timothy Bradley’s (sadly out of print) Paleo Bugs (2008) for those lucky enough still to have it, the art here has more of a dramatic flair, and the resource lists at the end are fresher.

Enticing fare for fans of all things Paleo.