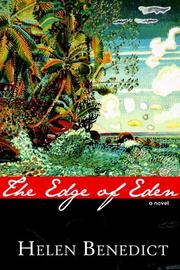 THE EDGE OF EDEN

Earthly paradise turns a British marriage hellish in this self-conscious, psychologically insecure novel from Benedict (The Opposite of Love, 2007, etc.).

There’s plenty of sin in Eden, in the form of the British Crown Colony of the Seychelles, mainly populated by the impoverished descendants of slaves. Minor Colonial Office employee Rupert has been sent to report on the economy of these Indian Ocean islands, a posting that requires the reluctant uprooting of wife Penelope and daughters Zara and Chloe. The novel opens with a sea voyage in 1960. Rupert, who “did not consider himself the philandering type,” flirts with another woman while Penelope is felled by seasickness; toddler Chloe, victim of her eight-year-old sister’s bullying, goes missing but then reappears without explanation. A pattern of inconsistencies and reverses continues on the island. First Penelope, previously happily married and faithful, has a grim affair with the governor. Then Rupert succumbs to his secretary Joelle, a strikingly lovely local woman who is both manipulative and sincerely affectionate. She eventually succeeds in breaking up Rupert’s marriage, then gets pregnant. Witch doctors and grigri (island magic) feature prominently as Zara plots to reunite her parents, and Joelle uses spells to drive Penelope back to England. Shifts of motivation dog the sometimes farcical story line until the novel turns darker, as the grigri finally claims a victim.

Despite moments of lyricism, more sensational than subtle.