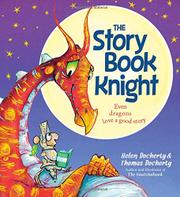 In an homage to reading that also recalls The Story of Ferdinand, the power of words is extolled in rhyme.

“Leo was a gentle knight / in thought and word and deed. / While other knights liked fighting, / Leo liked to sit and read.” So when an ad for a dragon tamer appears in a magazine, the young mouse knight’s parents insist he take up the charge. Reluctantly, he sets off and encounters in succession a griffin, a troll, and a dragon. In each case, he saves his hide and avoids fighting by reading the creature a story featuring it. The coup de grâce? He lets each monster keep the book he reads to it. When he reaches home, his parents hug him and declare him a hero. Now Leo “doesn’t have to fight at all. / He’s left in peace—to read.” The sprightly, brightly colored illustrations fill the scenes with medieval details and exaggerate the action. In addition to the anthropomorphic mice, such common English woodland creatures as hedgehogs, badgers, and rabbits populate the quaint, half-timbered village and castle, and by the end of each encounter the not-very-scary monsters are all smiling genially. The rhymes easily move the story forward.

A sweet tale about the power of story, just right for nascent fans of Redwall.