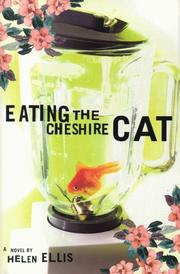 First-novelist Ellis savagely dissects southern social-climbing as it warps the lives of three Alabama girls. It’s clear from the start that there will be no holds barred: in chapter one, at her daughter’s Sweet Sixteen party, Mrs. Summers gets Sarina Summers drunk and smashes the girl’s crooked pinkie fingers with an ax handle’so that the doctor will be forced to fix Sarina’s single less-than-perfect attribute. Mrs. Summers is determined that Sarina will make up for her own divorce and long-ago failure to get into the exclusive Tri Delta sorority at the University of Alabama. Equally obsessed is Mrs. Hicks, the Summers family’s neighbor in an exclusive residential area called Cheshire, whose own efforts to make daughter Nicole the belle of Tuscaloosa are stymied by Nicole’s increasingly pathological love for Sarina. Bitty Jack Carlson, though, is from another world entirely; her parents do maintenance and laundry at Camp Chickasaw in impoverished Summons County, where Tuscaloosa’s elite send their kids for the summer. Nothing but trouble emerges from the three family’s interactions, beginning when 13-year-old Sarina falsely accuses Bitty Jack’s father of molesting her. During college years, well-connected but nerdy Stewart Steptoe becomes a bone of contention between sorority queen Sarina and scholarship student Bitty Jack, while Nicole (who has definitively blown her chances at Tri Delta by chopping off her mother’s ring finger) skulks in the background. Ellis depicts the cruelty of Tuscaloosa’s ingrown social scene with plenty of bite, and her gothic plot twists keep the story moving at a brisk clip. But her severely damaged characters prompt detached sympathy rather than emotional engagement, and the comedy is so black that only the toughest readers are likely to laugh. The hyperbolic denouement dismayingly implicates the only protagonist who seemed to have a chance at escaping this morally repugnant universe. Flawed, but still an impressive debut from a writer who may do even better next time, now that she’s vented some spleen.