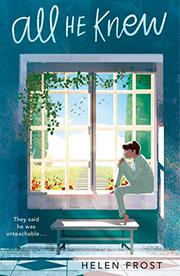 A young deaf boy faces the horror of institutionalization in the late 1930s and ’40s. This verse novel tells the story of Henry, who is born hearing and becomes deaf due to a fever at age 4. The school for the deaf erroneously labels him “unteachable,” and he is sent to an institution for the “feebleminded,” where the children face abuse and neglect. Henry’s story merges with that of Victor, a conscientious objector who works at the institution. Frost depicts one grim reality of deaf/Deaf life in mid-20th-century America in a way that is approachable for readers as she explores the rarely discussed story of conscientious objectors in World War II. The story is told in discrete poems, creating an episodic narrative that highlights poignant moments and delves into characters’ thoughts. All the characters are presumed white. However artful, the book is not without flaws. Characters repeatedly suggest that Henry’s institutionalization is particularly unjust because he is “smart,” an implicit comment on intellectual disabilities that is not adequately explored. The author’s note detracts from the story itself, raising questions that wouldn’t need to be asked otherwise, such as why the author gave Henry the ability to speak when the man he is based on could not. A sequence of poems by the author’s mother-in-law that inspired the novel are included and contain an outdated portrayal of disability that is presented without context or commentary for readers.

An engaging, emotional read that tells an important story—with caveats.