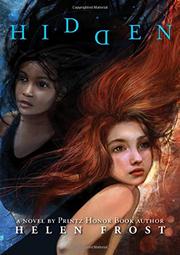 From the award-winning Frost comes a wildly imaginative, thought-provoking novel in verse that centers on the unlikely friendship that arises between two teenage girls as a result of an accidental kidnapping. Darra Monson’s father, an abusive, unemployed mechanic, steals a minivan, not knowing that 8-year-old Wren Abbott, daughter of the local school superintendent, lies hidden in the back. Told entirely from her perspective, Wren’s unwitting capture and eventual escape comprise the first third of the story before the narration switches to Darra, who relates how her father is caught and imprisoned, all the while blaming Wren for his arrest. Though from opposite sides of the tracks, Darra and Wren’s paths cross again six years later at summer camp, where the 14-year-olds see each other for the first time. Slowly the two begin to unpack that uninvited trauma. After breaking the ice and overcoming Wren’s nearly drowning Darra, the two begin to talk, and Frost’s lyric narrative resolves movingly by alternating between the two protagonists. Frost’s tale exhibits her trademark character development that probes the complexities of intimate relationships. Here Wren’s touching statement, “I was a happy little girl / wearing a pink dress,” eventually leads to Darra’s private admission to Wren: “None of it was our fault.” Both tender and insightful, this well-crafted, fast-paced tale should have wide teen appeal. (notes on form) (Poetry. 10-16)