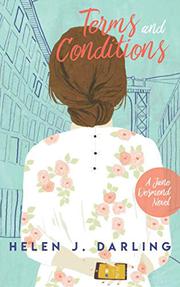 A woman takes the “fake it till you make it” approach to a new level after moving to New York City in this comic novel from Darling (I’ll Know Me When I Find Me, 2018).

Thirty-five-year-old Jane Desmond has moved to New York, hoping to break into the publishing industry. Unfortunately, her mother, Linda, back home in Virginia, can’t stop badgering her for updates. Jane agrees to post one selfie a day to Facebook in order to assuage any maternal anxieties—and to show off her glamorous new lifestyle. The only problem? Her life isn’t actually that glamorous. She’s having trouble finding an apartment and a job, and her car window is quickly smashed within three hours of her arrival. But her mom doesn’t have to know that, right? As Jane begins selectively editing her selfies for the folks at home, she ends up presenting an increasingly rosy—and fictional—version of her life in the big city. Unfortunately, the lies told for her mother’s benefit begin to take their toll: “the pressure of constructing a happy story for her benefit drained me in a way I hadn’t anticipated. Each day she responded to my posts, ‘Looks like you’re doing great!’ and I was, I was fine, but not in the way she thought I was.” Can Jane figure out a way to live honestly in New York without feeling like a total loser? Darling narrates Jane’s misadventures with empathy and irony in equal measure. Once Jane moves into an apartment above a fish market, her neighbor Tessa explains that cats love their fire escape: “They’re nice company but don’t pet them. I did once when I first moved in and the thing bit me, and then my hand got infected. So just smile and wave.” The novel is rather thin on plot, but the urban experiences are well told and should be enjoyable to anyone who has moved alone to a new city. Although Jane suffers a number of minor catastrophes, the book never gets so dark that it will put off readers looking for light fiction. This is Darling’s second novel about Jane, and while readers don’t need to be familiar with the first one to follow the plot of this book, they may end up looking forward to the next one.

A light, funny account of a woman’s attempt to make it in New York.