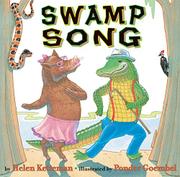 “Down in the swamp / where the cypress grows, / Old Man Gator” starts the rhythm “with a tip, tap, tippity-tap.” Swamp flora in Goembel’s acrylic wash and colored ink lines aptly frame center stage, where jazzily dressed fauna engage in combinations of sounds and moves. Each double-page spread introduces a new animal—aerial creatures such as the ibis and the wood stork, land animals such as the black bear and the pygmy rattler and water creatures such as the bullfrog and the river otter—making for a comfortable mix of the familiar and unfamiliar. Ketteman sets a you-can’t-help-but-chant-it verse pattern that incorporates a different onomatopoeic sound for each animal, from the dragonfly’s “whir, whirr, whirrity-whirr” to the fox squirrel’s “chit, chee, chittety-chee.” These set the stage for a musical jamboree in which all 13 animals complete this satisfying presentation, performing their signature moves and tones one at a time, handing off the final “TIP, TAP, TAP” to Old Man Gator. Oh, yeah. (Picture book. 2-4)