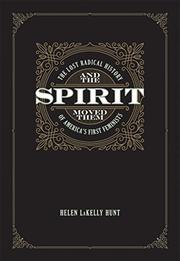 AND THE SPIRIT MOVED THEM

The story of the abolitionists of the early to mid-19th century who set the stage for women’s campaign for equality and the vote.

Growing up in a wealthy family in which her father was “the dictator of the house,” Hunt (Faith and Feminism: A Holy Alliance, 2004, etc.) felt an immediate sense of kinship with 19th-century feminist abolitionists who railed against patriarchal culture. She was “captivated,” she writes, “by these women who had declared their right to shout out against slavery and claim their own authority.” The author sees these reformers as the true founders of American feminism, years before the iconic Seneca Falls Convention of 1848. Hunt has two aims in her revisionist history: to celebrate women such as Angelina and Sarah Grimké, Mary Grew, Lydia Maria Child, Maria Weston Chapman, Sarah Douglass, and Catharine Beecher, who have been largely overshadowed by Elizabeth Cady Stanton and Susan B. Anthony; and, equally as important, to highlight the women’s religious faith. Early feminists, she writes, viewed abolition as “a sacred mission and religious vocation.” They felt “armed by God,” as they denounced church hierarchy and pro-slavery clerics. The Southern church, Hunt discovered, “gave religious cover to slavery, citing carefully chosen Bible verses and propagating the notion that the slaves were heathens.” Feminist abolitionists countered with their own reading of Scripture, emphasizing God’s love and compassion. Although they shared faith, not all feminists saw blacks as equals; agreed that black men should be enfranchised; nor considered women to be men’s equals. Defiant as they were against slavery, many women believed that only white men should wield political power, with women’s “proper sphere” relegated to the home. These differences sowed seeds of dissension among various factions of abolitionists. Regretting the absence of “Christian zeal” among contemporary feminists, Hunt urges a union between secular and faith-based feminism, inclusive of all religions.

The faith-based argument is not always convincing, but the author’s call for renewed feminist action, based on “the spirit and ethic of love,” makes for timely reading.

ALL ON FIRE
by Henry Mayer
Children

WOMEN IN THE WORLD OF FREDERICK DOUGLASS
by Leigh Fought
Nonfiction