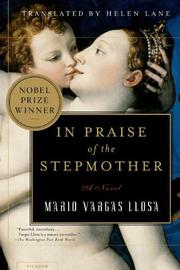 IN PRAISE OF THE STEPMOTHER

A particularly mandarin performance by Vargas Llosa this time out, art- and sex-imbued, with color reproductions of paintings that set the tonal ranges of the chapters. Alfonso is a Lima high-school boy, the son of a wealthy sensualist, Don Rigoberto, and the stepson of Rigoberto's new wife Lucrecia. The married couple have a blissful sex life, into which Alfonso intrudes a seemingly innocent, angelic, but hormonally charged presence the likes of which Lucrecia finally can not resist. The book's denouement is very French, tartly cynical. But Vargas Llosa spends the real wealth of his prose—some of it spectacularly distilled, some a bit goopy, all superbly translated by Lane—in a serrated group of meditations. These either are on the paintings referred to (Don Rigoberto and his wife assume different personae in their love play—thus the figures in the paintings) or on the art-body nexus: Rigoberto's pre-sex ablutions are a homage to the body as perfection. The Laclos-like ending throws a cloud of doubt over the jeweled celebration of art and sex, and thus gives the book a welcome echo of psychological ambivalence. But readers will find themselves more intrigued by the silkiness of Vargas Llosa's control (in this respect, he has become Calvino's heir), by the suavity of his allegorical turn of mind.