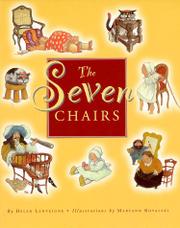 Ostensibly paying homage to the illustration “The Seven Chairs” from Chris Van Allsburg’s The Mysteries of Harris Burdick (1984), Lanteigne explores the destiny of the seven chairs a man created during his life. Lanteigne’s chairs act as an analogy for the man’s growth and development. Cyclical in nature, the book begins and ends with two crooked three-legged stools: one made in the early years of the man’s life and one created in old age, both becoming the property of a calico cat. In the ensuing years the man produces a chair with a heart carved into it to express his love, as well as a child-sized one for his daughter. The destination of his fifth chair is Paris, though Van Allsburg wasn’t so specific (“The fifth one ended up in France”). There is humor to be found in the destinies of the various chairs, e.g., his masterpiece ends up as “the prop that held open the screen door of Miss Maybelle Jenkins’s Beauty and Tea Parlor.” Kovalski creates heavily pigmented pictures with lush images that lend an appropriate other-era, other-worldly feeling to the journeys of the chairs. A great book to inspire children to ponder the “lives” of the objects around them. (Picture book. 4-7)