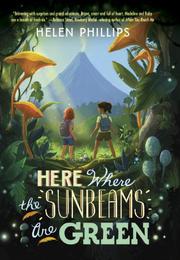 HERE WHERE THE SUNBEAMS ARE GREEN

When Madeleine and Ruby visit the supergreen rain-forest resort where their ornithologist father has been employed to find endangered species, they find him distressingly changed—and maybe contributing to a bird’s extinction.

The mystery of the Weirdness that began after their father wrote them with his REALLY GOOD NEWS deepens when the family arrives from Colorado. The luxury La Lava spa doesn’t allow children, so the girls, 12 and 9, and their mother will be staying nearby at Selva Lodge. When they finally see their father, after six months apart, he doesn’t seem to care about them at all. Their mother, after daily yoga sessions at the spa, is unbelievably calm and incurious. It is their 14-year-old baby sitter and Spanish tutor, golden-eyed Kyle, who teams up with them to explore their jungle surroundings and find and save the last of the Lava-Throated Volcano trogons, already formally declared extinct. In her first novel for young readers, Phillips demonstrates a keen understanding of sibling dynamics as well as love for the lush tropical setting. The girls are believably awed and attracted by the spa’s lavish accommodations for the superrich, frightened by the hint of evil underneath and made uneasy but enchanted by the magic that surrounds them.

More fantasy than magical realism, this eco-adventure maintains its mystery and suspense right up to the end.