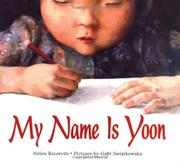 MY NAME IS YOON

An unhappy young immigrant seeks, and at last regains, a sense of self in this atmospheric, expressionistically illustrated episode. Instead of writing her own name on her papers at school, Yoon calls herself “Cat,” then “Bird”—“I wanted to be BIRD. I wanted to fly, fly back to Korea”—and even, after a classmate’s friendly culinary overture, “Cupcake.” Ultimately, she finds her balance again: “I write my name in English now. It still means Shining Wisdom.” Swiatkowska internalizes Yoon’s adjustment, both by depicting her escape fantasies literally, and by placing figures against expanses of wall that are either empty of decoration, or contain windows opening onto distant, elaborate landscapes. Reminiscent of Allen Say’s work for its tone, theme, and neatly drafted, often metaphorical art, this strongly communicates Yoon’s feelings in words and pictures both. She is also surrounded by supportive adults, and her cultural heritage, though specified, is given such a low profile that she becomes a sort of everychild, with whom many young readers faced with a similar sense of displacement will identify. (Picture book. 8-10)