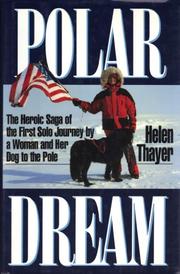 Simple, appealing account of a woman's solo ski trek to the magnetic North Pole. Thayer's goal isn't the imaginary dot at the top of the globe that bedeviled Peary and Cook but, rather, the spot to which all compasses point, some 800 miles north of the Arctic Circle. Nonetheless, this is a formidable journey filled with dangers, including horrendous cold (wind chills of -100 F.), dangerous ice, polar bears, and exhaustion. What's more, no woman has ever done this before, and Thayer is 50 years old when she sets out. After 27 grueling days towing a 160-pound sled, she makes it. One reason is her fortitude; the other is a black husky named Charlie (``there was something about him I thought I could trust and I decided to take him with me,'' she writes in her unadorned manner). Charlie squirrels his way into Thayer's affections for good reason, since many times he saves her from polar bears on the attack. Thayer's encounters with these white-furred killing machines are terrifying. Once, she walks toward what looks like a cute cub only to find that it's a voracious adult; another time, Charlie's heroics involve locking his jaws on a bear's leg. Thayer never minces her fear (``the pit of my stomach was an ice-cube, even my knees were shaking''), and, at one point, she breaks down and sobs, but her eyelids freeze tight: ``There could be no more crying on this expedition.'' She endures storms, fog, starvation, thirst, and a desperate flight over cracking ice. Today, Charlie is snug on the homestead in Washington State, and Thayer is planning an expedition—with her husband—to the North Pole itself. Enough feminine overtones (tears, worry about eyelashes, plus the voice of a middle-aged woman) to make a solid, no-frills adventure for women as well as men. (Eight pages of color photographs—not seen.) (First serial rights to Cosmopolitan)