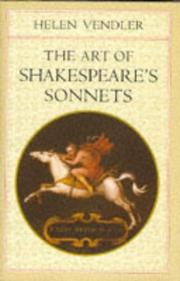 THE ART OF SHAKESPEARE'S SONNETS

Close readings that train a brilliant spotlight on Shakespeare's poetic performance, without however quite doing justice to the full dimensions of his achievement. A celebrated and prolific critic, reviewer, and lecturer on poetry, Vendler (The Given and the Made, 1995) offers an illuminating companion for Bardolators of all levels and stripes. Adamant that hers is a work of ``commentary,'' Vendler analyzes each sonnet in turn (they appear in both original and modernized formats), explicating in an accessible manner the structures that organize them, without dwelling on the significance of her interpretations. While Vendler attends dutifully to imagery, and occasionally (too seldom, in fact) to rhythm and meter, she makes Shakespeare's language her central object. She illuminates the sources—practical, philosphical, Anglo-Saxon, and classical—for his multifaceted vocabulary; underlines his love for anagrams, puns, and echoing effects; and highlights the subtle ways in which the sonnets draw on his dramatist's knack for dialogue. Her overall purpose is to showcase the dynamic force of the sonnets as ``speech acts,'' as interventions in ongoing discussions. This approach works best where Vendler can invoke an intimate interlocutor for Shakespeare typically the Young Man or the Dark Lady, considered by critical tradition to be the sonnets' addressees. For example, her discussion of the famous sonnet 116 (which begins ``Let me not to the marriage of true minds / Admit impediments'') convincingly contends that Shakespeare there responds to the Young Man whom he so admired. But Vendler seldom considers how the poet might have been seeking to project his voice into broader discussions. Nor, unfortunately, given her gifts, does she even so much as gesture toward relating her readings to the discussion of Shakespeare-in-history that has lately absorbed not only academic commentators, but also such mainstream writers as Garry Wills. Nevertheless, an immensely enriching account of Shakespeare's complex verse: readings whose perspicuity and accuracy will form a solid basis for many more.