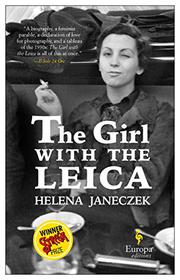 THE GIRL WITH THE LEICA

A charismatic martyr of the Spanish Civil War lives on in the memories of three erstwhile pals who have an axe to grind.

In 2018, Janeczek won Italy’s prestigious annual Strega prize, the first woman to have done so in 15 years. Gerda Pohorylle, working pseudonymously as Gerda Taro, was also a first in the 1930s, a female photojournalist on the front lines as leftist troops waged their ultimately unsuccessful battle against the Franco coup. A German Jew who fled Leipzig for Paris, Gerda and her 20-something friends enjoy a brief idyll of cafe society. A typist, she becomes obsessed with photography and heads for Spain with her mentor and lover, André Friedmann, a Hungarian refugee, who takes on the name Robert Capa. (Together they concocted both aliases.) The two separate to cover the rebellion, intending to reunite, but shortly before her 27th birthday, Gerda is killed in a collision with a tank. Janeczek, as an epilogue confirms, hews closely to the known facts about her characters, all real people. The pre–World War II upheaval is very much in the background. Instead we have mostly retrospective musings, half-realized scenes of young love and its attendant angst as recounted by Gerda’s surviving contemporaries, all, like her, German exiles. Dr. Willy Chardack lives in Buffalo, New York, where his routine of the New York Times and pastries is disrupted by a phone call from an old friend that prompts him to ruefully recall his mostly unrequited crush on Gerda. Ruth Cerf, Gerda’s best girlfriend, seems to view Gerda mainly as a rival for male attention. Georg Kuritzkes, a neurologist in Italy, still rankles over being displaced by Capa as Gerda’s love interest. For long stretches, little happens. Gerda is seen only through a glass darkened by resentment. But the chief hurdle for readers of English is the prose. Surprisingly, Goldstein's translation fails to unknot frequent syntactic snarls, in contrast to her limpid renderings of Elena Ferrante’s work. The text is replete with head-scratcher sentences like this: “The ladies of high society were already competing to see who could gorge Hitler, in the face of the workers reduced to poverty by their consorts.”