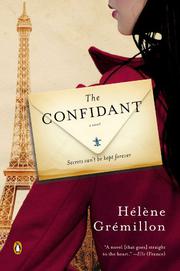 From French writer Grémillon, an impressive first novel, a tale of love, infidelity, jealousy and guilt presented in a manner that grows in suspense and surprises right up to the very end.

When Camille Werner’s mother dies in 1975, she finds among the condolence letters a long letter from a stranger narrating a story that bears no apparent relation to her or her mother, so she naturally thinks the writer must have made a mistake in addressing it to her. As the letters continue coming regularly every week, she begins to believe it is a work of fiction that an aspiring author is sending her in epistolary installments as a way to get her attention. Camille is an editor at a publishing house, so she is intrigued by this unusual but plausible explanation. Then, as the story continues, she recognizes odd little clues that force her to realize the letters are indeed meant for her and are not fiction, but are in fact the story of her family and her conception, especially poignant insofar as she is herself pregnant. The story of Camille’s family, set in France in the early years of World War II, is told by three authentic, distinct voices. The transitions flow naturally from one to the other with musical precision and harmony, until Camille adds her own reactions and revelations to move the narrative on to the next verse.