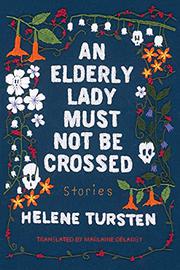 AN ELDERLY LADY MUST NOT BE CROSSED

En route to a luxury vacation in South Africa, Maud recalls half a dozen earlier times when her generally untroubled life was threatened by someone who ended up coming to grief. “An Elderly Lady Begins To Remember Her Past” rehashes her latest foray into criminal violence and her satisfying escape from Tursten’s franchise detective, Inspector Irene Huss. “Little Maud Sets a Trap” takes her back to her childhood, when she sticks up for her neurasthenic older sister, Charlotte, by taking condign, though not yet murderous, revenge on the boys who’ve bullied her. “Lancing a Boil” shows how Maud, now a substitute teacher, deals with her demotion when the regular teacher she’s replaced seeks to return to the classroom. “The Truth About Charlotte” recalls Charlotte’s sad demise, which leaves Maud much wealthier and freer to accrue an even larger income and begin her world travels. Maud smartly relieves her longtime neighbor, seamstress Elsa Petrén, of the problems her wastrel son has stuck her with in “The Peter Pan Problem.” And when she finally arrives at her destination in “An Elderly Lady Takes a Trip to Africa,” the longest and most deliberately plotted of these stories, she gets to display an unaccustomed generosity, even magnanimity, to an impoverished family brought even lower by a crime Maud is more than happy to avenge. Readers may want to think twice before sampling the appended naughty-and-nice cookie recipes.

A guidebook to growing old without a single regret for victims who deserved just what they got.