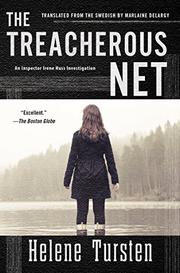 Göteborg’s Violent Crimes Unit never has a nice day. But this summer they’re especially hard-pressed by diminishing numbers and a caseload that’s soared a lot faster than Swedish temperatures.

Hardly have detective inspectors Irene Huss and Jonny Blom, already shaken by a rash of violence between feuding biker gangs, taken on the case of Alexandra Hallwiin, 14, who was found strangled five days after she went missing, than an enterprising dog finds a sadly similar victim in the woods. Fifteen-year-old Moa Olsson, who was killed shortly before Alexandra, stands out for her surprisingly expensive taste in clothes and accessories. Forensic evidence leaves little doubt that the two girls were murdered by the same sex killer, a man who assumed a series of false identities to befriend them online. But Irene’s new boss, Superintendent Efva Thylqvist, seems unwilling to let Irene join Jonny in working Alexandra’s death. The boss has problems of her own: Inspector Birgitta Mosberg-Rauhala remains out on leave while she’s pursuing a law degree, and the discovery of a corpse in a building that’s being demolished after a fire threatens to tax the Violent Crimes Unit to its limit. Even worse, the mummified corpse, once it’s identified as that of Mats Persson, who vanished in 1983, is linked to a series of crimes that go back as far as 1940. Will the VCU ever emerge from these two investigations to see the light of day again?

The case reaching back in time is considerably more tangled and less urgent than the one that points disquietingly toward the future, threatening to claim new victims. Through it all, DI Irene Huss remains appealingly unflappable under pressure.