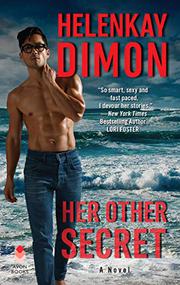 A woman seeking refuge on a remote island inadvertently becomes an alibi for her sexy, grumpy handyman, who's being framed for murder.

Whitaker Island, “the perfect place to disappear,” promises sanctuary for Tessa Jenkins, but she didn’t expect to meet someone like Hansen Rye, the hot island handyman who can fix anything but isn’t much of a people person, ignoring all the women who flirt with him. When Tessa asks him to help her investigate a seemingly abandoned boat, they see a mysterious man walking out of the sea dressed in a suit. The man disappears into the woods, and neither Hansen nor his best friend, Ben, the island cop, can find any trace of him. When Hansen stops at Tessa’s house to give her an update, he finds her terrified, since a fierce storm is raging and someone just tried to break in. He stays the night to make sure she’s safe, allowing them each to hint at their mutual crush and offering Hansen an alibi when the man is found outside Tessa’s home the next morning, murdered. Hansen, who hadn’t seen the man’s face on the beach, now recognizes him as the person responsible for a tragedy in his family, someone he’d threatened in the past. Tessa stands by Hansen, and together they and Ben try to solve the crime, which ultimately makes them targets of a variety of enemies. Dimon demonstrates her romantic suspense chops, setting her new series on an island full of residents who are part secret keepers, part gossipmongers. Tessa and Hansen’s shared attraction, respect, and trust drive their inevitable happy-ever-after, and we are entertained and intrigued by the journey.

A fun, sexy, romantic mystery and a great series launch.