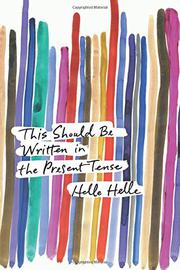 THIS SHOULD BE WRITTEN IN THE PRESENT TENSE

The English-language debut of one of Denmark’s most esteemed—and most popular—authors.

A slender book composed of short bursts of what seems to be guileless prose, this is a surprisingly difficult read. It begins where it ends, and in between these two iterations of the same moment, the narrative is made up of disjointed scenes from a young woman’s mostly very uneventful life. The story, such as it is, doesn’t flow; it accumulates. Dorte Hansen is 20, ostensibly a student of literature at Copenhagen University, and living on her own by the train station in Glumsø. Any plot synopsis would be both misleadingly dull and antithetical to what the author is doing in this novel. The narration is a particularly austere version of first-person, shorn of the devices—dialogue rich in back story, for example, or detailed internal monologue—that writers generally use to guide readers through their invented worlds. As Dorte’s recollections move around in time and space, the reader is left to stumble along behind her, sifting through the minutiae of her life. Dorte explains from the outset that she has thrown most of her work in the garbage, and there’s a sly humor in this. Late in the novel, another writer explains how she strips her own texts of anything that seems to lack a purpose. Dorte disagrees. “Sometimes things happen,” she argues. The other writer is unpersuaded: “But that’s only in reality. And here we’re talking about fiction.” This particular work of fiction seems to contain nothing but the bits that another writer might have left out. It’s the reader's task to find meaning—if there is such a thing—in what Dorte doesn’t say, in the pages that she destroyed.

A sort of realism that is at once technically stringent and mordantly amusing.