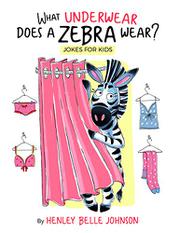 WHAT UNDERWEAR DOES A ZEBRA WEAR?

A debut picture book delivers jokes for the preschool crowd.

Finding jokes that are both funny and make sense to younger readers can be a challenge. But Henley Belle Johnson—with help from her mother and editor, Elle Muliarchyk Johnson, and debut illustrator Dalbuz—captures that balance perfectly here. The title joke uses a pun on the animal’s name, linking it to a sound-alike article of clothing (“A Z-BRA!”). The majority of the jokes in the collection begin with an animal, using the creature’s name (or the sound it makes) to complete a pun in the punchline. The clever way of playing with sounds makes the jokes accessible to younger readers. Helpful, color-printed portions of dinosaur names are especially useful in offering pronunciation clues to young listeners trying to guess the answers to the questions posed. One Spanish joke—“What does grass say to the gardener who waters it? GRASS-ias!”—shows readers that plays on words are not limited to English. Dalbuz’s brightly colored cartoon images are silly fun and will keep youngsters who can’t yet read giggling even if they don’t guess the punchlines. While the majority of the humans featured in the book have pale skin, one young joke teller and another background character are people of color. The animals, particularly the dinosaurs, are far more diverse.