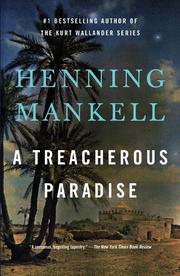 The chronicler of Kurt Wallander (The Troubled Man, 2011, etc.) sets his sights on something dramatically different: the African odyssey of a young turn-of-the-century Swedish woman that’s based on facts—just not very many facts.

Five years after her lumberjack father’s death in 1899, Hanna Renström’s mother, Elin, sends the 18-year-old off to businessman Jonathan Forsman’s home in coastal Sundsvall, where the chances of survival look brighter. Forsman not only treats Hanna kindly and respectfully and gives her a job as a maid, but arranges her passage to Australia as a higher-salaried cook on a ship he partly owns. Hanna finds love aboard the Lovisa, but barely a month into her marriage to third mate Lars Lundmark, a fever carries him off. Armed with £50 in widow’s benefits, and lacking any strong ties to the ship or its destination, Hanna decides on the spur of the moment to steal away while the Lovisa is docked one night in Lourenço Marques and runs smack into another world. When she finds that she’s seriously ill, she begs help from women she thinks run a hotel. They’re actually prostitutes in Senhor Attimilio Vaz’s brothel, O Paraiso, and he’s the highest-contributing taxpayer in all of Mozambique. Here, Hanna once again finds unexpected kindness and romance even before she ends up as the owner of O Paraiso, but this time, the world in which she’s landed is shot through with a racism so pervasive that it defines every human relationship, and Hanna’s closest and most enduring emotional connection turns out to be with Carlos the monkey.

Hanna’s adventures, based on elliptical hints from the journal of a real-life Swedish madam in 1905 Mozambique, make a story as magical as a fairy tale and just about as brutal too.