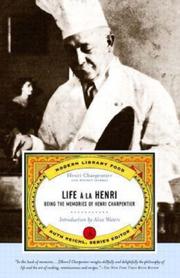 Being the Memories of Henry Charpentier

Former New York Times food critic Ruth Reichl, now editor of Gourmet, selects this savory memoir for her Food series of reprints (see Shapiro, below): it’s the charming and easygoing autobiography of a legendary chef who emigrated from France to the US and opened a number of renowned restaurants. When it first appeared in 1934, Kirkus (Sept. 15, p. 257) celebrated the unique blend of success story, food history, romance, and sheer magic. From the peasant boy’s humble beginnings to his life as an apprentice in France to his triumph in America, Charpentier is “a fascination of personality between book covers.” The famous and infamous stroll casually through his text. To top it off, the author includes a selection of recipes (“first aid to experiment”). At the time, we thought the appeal might be mainly in New York City—where the publisher would hit “a ten strike”—but in the years since first publication, foodies have spread across the land. Here’s an important addition to their libraries.