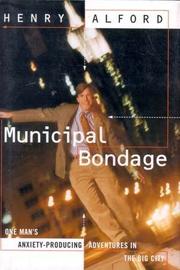 One Man's Anxiety-Producing Adventures in the Big City

The journalistic equivalent of a performance artist, Alford dreams up antic minidramas in which he can play at least a supporting role, stages them, and then reviews the results. On the evidence of the compilation at hand, the Manhattan-based freelancer (Mademoiselle, Spy, Vanity Fair, etc.) will do almost anything for a quiet laugh. Here, for example, he reports on close encounters with a clutter consultant, nude housecleaners (one man, one woman—at different times), modeling agencies, and the staff at upscale auction houses to which he had consigned bogus heirlooms. Included as well are droll accounts of the author's unavailing attempts to secure part-time employment at Macy's and to pass a dog-grooming test (with an uncooperative cocker spaniel in tow), plus his four- day stint as a volunteer chauffeur for the governor of Colorado during the 1992 Democratic convention in N.Y.C. If Alford occasionally misses the mark—with, say, nominal exposÇs of a profit-making enterprise ostensibly devoted to advancing the laggard cause of poetry or a Caribbean resort catering to licentious singles—his offbeat consumer guides are dead-on. Along the way, he rates the Big Apple's bed-and-breakfast accommodations, self-improvement videos, and the trendy experience of eating in the Plaza Hotel's kitchen in preference to its dining room. Among the set-piece essays is a series of bizarre interrogatories that address apocryphal issues (e.g., ``What If the Brontâ Sisters Had Been a Heavy-Metal Band?'') and offer a wealth of possible consequences (``1848 [they] lock manager, Mrs. Rochester, in attic''). These one-liner sideshows are an acquired taste, but at his best—which can be good indeed—Alford offers genuinely rueful takes on comic aspects of the urban experience.