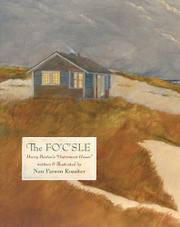 A poetic tribute to an early-20th-century cousin of Walden and the house where it was written.

Originally published in 1928 and still in print as an early classic of the modern environmental movement, Outermost House chronicles a year spent in a remote bungalow on Cape Cod watching waves and wildlife on the nearby beach and dunes. This account focuses less on Beston—a journalist, author of fairy tales and husband of children’s writer Elizabeth Coatsworth—than on his observations while in residence and the house’s later history up to its being “taken by the ocean” in 1964. Rossiter mixes short quotes from the original (“…the sandpipers stand on one leg and dream, their heads tousled deep in their feathers”) with commentary written in a similarly measured style. Her full-page and double-page–spread paintings are likewise spare: formal glimpses of avian passersby, views of the author gazing out to sea, or broad, subtly colored expanses of sky over ocean bordered by a slanting strip of empty beach.

The language and visuals both will put budding naturalists in a meditative mood.