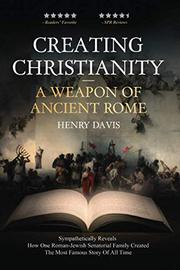 A Weapon Of Ancient Rome

A debut alternative history book explores the origins of Christianity.

Davis begins by offering the rare argument that “the Jesus described in the Gospels” did not exist. In fact, the author asserts, Christianity was a fabrication that postdated the Roman-Jewish wars of the first century. Working off the conclusions of other writers, such as Joseph Atwill, Davis weaves a detailed yet speculative explanation for how the New Testament and the Christian faith came into existence. He points to Arrius Piso, a contemporary and rival of Nero, as the originating genius behind the New Testament scheme. According to the author, Piso and his closest friends and family believed that by creating a new, peace-centered religion out of Jewish concepts, Rome could effectively counter Jewish rebellion across the empire. Beyond this, the new faith could serve as a Roman-centered religion and be used as a source of power for the Piso family and the empire itself. In this ambitious book, Davis attempts to prove his theory by using “the parallels discovered by independent scholar Joseph Atwill” between the New Testament and the works of Flavius Josephus (who the author maintains was the pen name for Piso). For instance, Davis argues that Jesus’ statement “I will make you fishers of men” is actually about a ship battle against the Jews in which many men were shot at or run down while trying not to drown. In addition, the story of the good Samaritan is about an attack on a Roman Legion by Jewish rebels, causing the soldiers to recuperate in Samaria. But these and many other such “parallels” are far from self-evident. Using the new religion to take the reins of power, Piso became St. Peter, the first pope; Pliny the Younger succeeded him as St. Linus, the second pope; and so on, the author claims. He tells readers: “Piso chose the name ‘Peter’ as his alias name of the founder of the Christian religion, because he was the ‘father’ (‘pater’) of the Christian religion.” Davis is painstaking in his research and provides ample textual evidence. Nevertheless, his highly unusual conclusions will likely find a skeptical reception from many believers and scholars.

A fringe and fanciful view of the creation of the Christian faith.