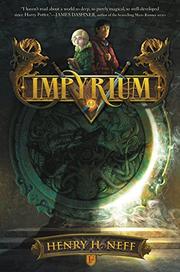 Neff offers a meaty, nearly 600-page series opener, an indulgence for readers thirsting for a futuristic cloak-and-daggers plot with magical creatures, including an elusive dragon that fraternizes only with the royalty of this post-Cataclysmic Earth.

After a prologue, readers meet young Hazel Faeregine, who is not interested in her family’s royal position within Impyrium. It is not only her lack of interest in politics that sets her apart from her olive-skinned sisters; Hazel is an albino, the only one in a set of triplets, which caused speculation of possibly wicked sorcery and makes most uneasy in her presence. Alternating chapters turn to 13-year-old, nut-brown Hob Smythe, who works in the mines beneath the Sentries Mountains. A stranger shows up in Hob’s small village of Dusk, revealing himself as a member of the Fellowship and recruiting young Hob to spy on the Faeregines to gain secrets that could possibly liberate the people under Impyrium rule. Hob accepts the invitation, which brings him together with Hazel and ultimately uncovers much more than anyone thought. The heady politics of the story mimics the classic rulers-versus–the-impoverished narrative, with an adolescent version of a Game of Thrones–like plot that unfurls with players on both sides vying for their rightful places.

Despite its length, this is a nicely paced adventure that attaches readers to the bookworm Hazel and the heroic Hob and leaves plenty of room for future installments. (character list and glossary) (Fantasy. 10-14)