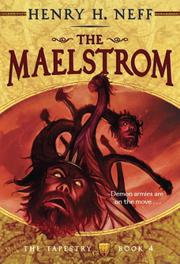 From the Tapestry series, volume 4

Juggling a multitude of characters against a world at war, Neff’s latest chapter in The Tapestry series proves his books are more than just a sum of their fantastical parts.

Max McDaniels has returned to Rowan Academy after time spent on the road, and his arrival could not be better timed. The demon Prusias has Rowan in his sights and a secret weapon that he is certain will crush his enemies underfoot. Max and the brilliant David Menlo must determine what this weapon is and find a way to defeat it, all the while keeping their eyes peeled for a group of assassins that have marked Max for death. As with his previous books, the author wastes no words with back story, expecting readers to have read the previous novels or to catch up quickly. What started out as an American Harry Potter has instead, over the years, morphed into something that looks more like an American Lord of the Rings. Within its fantasy world, Neff makes this book a kind of in-depth consideration of war itself. Covering espionage, disinformation, false diplomacy and even cryptography (demonic cryptography, but still), he gives readers an education in the clandestine tools of war. Despite heavy themes, he continues to balance seriousness with a lighthearted humor that keeps the pages turning.

A strong, gutsy chapter in what is already a noteworthy series.