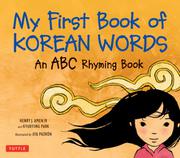 MY FIRST BOOK OF KOREAN WORDS

Two language-learning and software professionals, Amen and Park, use an alphabetic structure to introduce Korean words using simple verse supplemented by tidbits of surprising information. For example, one page reads “D is for dal, / the moon shining bright. / I think it’s a rabbit / who visits each night.” The sidebar states that in “Korea and other East Asian countries, people say there’s a rabbit in the moon in the same way that we say there’s a man in the moon.” Illustrations are reminiscent of manga-styled cartoons, with a little girl named Ji-min providing additional context for the definitions. Strengths include seeing the Korean words in Hangeul as well as in its Romanized form, with the English word in bold to correlate the two. Although there is an occasional less-than-successful rhyme, the word selections are interesting and provide insight into the culture. However, the alphabetic structure is problematic. The Korean alphabet does not have equivalent sounds for the letters F, L, Q, V, X and Z, nearly a quarter of the examples. An English word stands in its place. Although this too provides insight into the language, the inconsistent structure creates confusion.

A valiant attempt to introduce culture and simple words, but the alphabet structure is a poor vehicle.