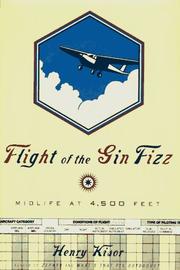 FLIGHT OF THE GIN FIZZ

A deaf editor-writer learns to fly and pilots a Cessna cross- country in a nostalgic search for self and the grass-roots camaraderie that he says is waning in society but still survives in general aviation. Having begun to experience a sort of midlife doldrums, Chicago Sun-Times book-review editor Kisor (What's That Pig Outdoors? A Memoir of Deafness, 1990, etc.) purchased a small 30-year-old Cessna 150 in which he retraced the transcontinental path of a celebrated early aviator, Cal Rodgers. Rodgers was himself a victim of hearing loss when he made the trip, in 1911, in a canvas-covered plane built by the Wright brothers. Eighty-some years later, as the Simpson trial enthralled the world, Kisor barnstormed from airfield to airfield in dogged pursuit of Rodgers's spirit. Telling two stories in one, Kisor intersperses the narrative of his own day-to- day experience with parallel descriptions of Rodgers's travels, which included numerous crashes, emergency landings, and breakdowns. Kisor can't hear, but he can lip-read, and he can speak and thus transmit radio messages. His deafness adds an element of complexity and danger to a journey that, today, is an otherwise fairly mundane exercise, but his own story, by inevitable comparison to Rodgers's, though it does offer some interesting aviation folk, lacks an urgent sense of drama. There's a bit too much description of airport FBO (fixed base operations) facilities and hosts; routine flight plans filed, completed, and closed out; and mostly friendly airport and service-industry personnel whom he meets during frequent stops along his course. For Kisor, a self- described political liberal of conservative behavior and friends, who resists being labeled as handicapped, flying is, ever and always, an exercise of independence. A relaxing armchair entertainment, and an empowering tale for readers who face any kind of physical deficit. (16 pages b&w photos) (Author tour)