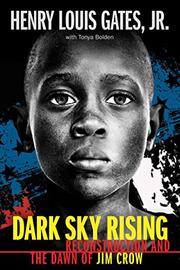 Reconstruction and the Dawn of Jim Crow

From the Scholastic Focus series

“In your hands you are holding my book…my very first venture in writing for young readers,” Gates writes in a preface.

And readers can tell…though probably not in the way Gates and co-author Bolden may have aimed for. The book opens with a gripping scene of formerly enslaved African-Americans celebrating the Emancipation Proclamation. It proceeds to engagingly unfold the facts that led to Reconstruction and its reaction, Jim Crow, until it disrupts the flow with oddly placed facts about Gates’ family’s involvement in the war, name-dropping of other historians, and the occasional conspicuous exclamation (“Land! That’s what his people most hungered for”). Flourishes such as that last sit uneasily with the extensive quotations from secondary sources for adults, as if Gates and Bolden are not sure whether their conceptual audience is young readers or adults, an uncertainty established as early as Gates’ preface. They also too-frequently relegate the vital roles of black women, such as Harriet Tubman, to sidebars or scatter their facts throughout the book, implicitly framing the era as a struggle between African-American men and white men. In the end, this acts as a reminder to readers that, although a person may have a Ph.D. and have written successfully in some genres and media, that does not mean they can write in every one, even with the help of a veteran in the field.

Well-intentioned, well-researched, but awkwardly written considering the caliber of the scholar and his expected scholarship.